An entrepreneurial spirit. A chance discovery. The perfect partnership. This is the story of how Lindt & Sprüngli came to be.

It all began with the opening of David Sprüngli’s small confectionery in Zurich, Switzerland. The business grew quickly thanks to Sprüngli’s entrepreneurial spirit and passion. Soon Sprüngli was a name of renown in the chocolate industry.

In a small confectionery shop on Marktgasse in Zurich’s old town, David Sprüngli and his son Rudolf Sprüngli-Ammann produced the first solid bar of chocolate in the German-speaking part of Switzerland. It instantly became a success. 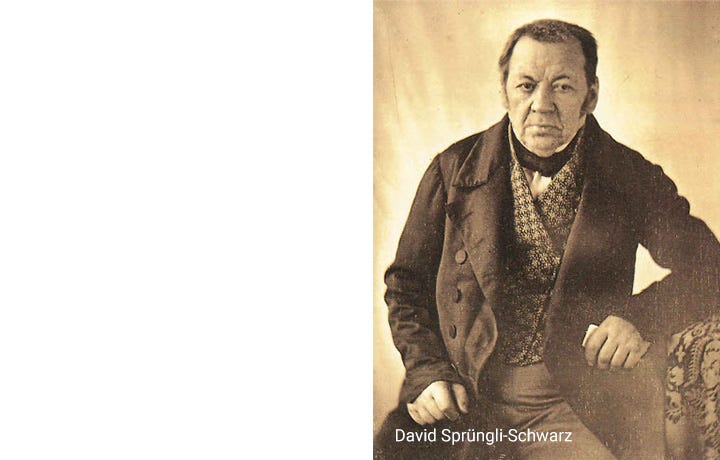 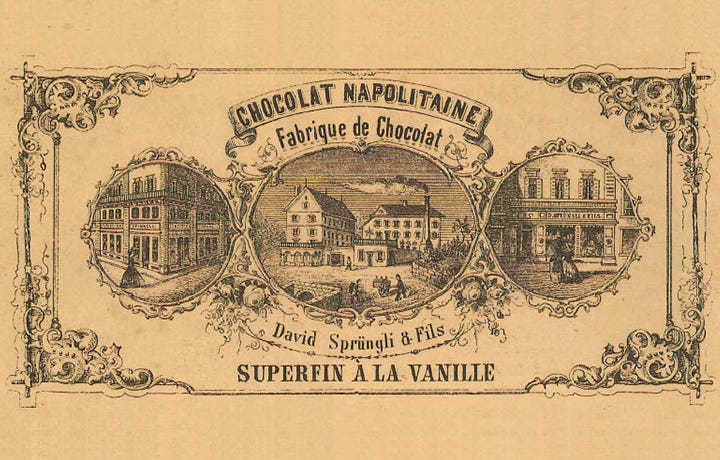 Sprüngli grew rapidly, opening the Schleiftobel factory in Horgen in 1847. You could actually smell chocolate in the air when production began.

During the second half of the nineteenth century, David Sprüngli expanded his business and made a name for himself. His two sons, Rudolf and Johann Rudolf, would eventually take over the company, splitting its assets. As these internal changes were happening at Sprüngli, Rodolphe Lindt, the son of a pharmacist, was just getting started in a small confectionery in Berne…

David Sprüngli and son inaugurated a second confectionery on Paradeplatz – the now famous Confiserie Sprüngli. Its elegant interiors quickly found favour among the locals, making it a popular place to gather. 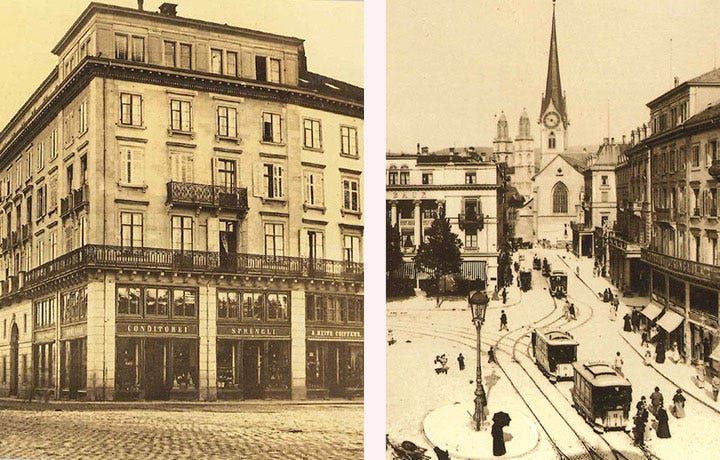 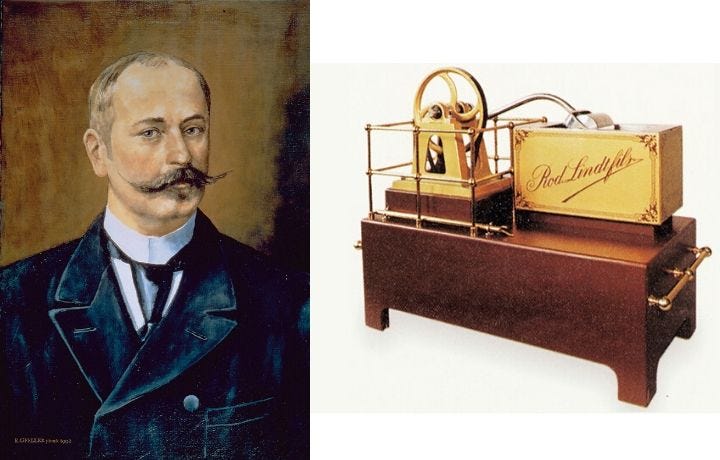 1879: The Invention of Conching

Shortly after opening in 1879, Lindt’s chocolate company, Lindt & Sons only produced hard, bitter chocolate. Undeterred, Lindt kept experimenting, until one Friday night a happy accident changed everything. He accidentally left his factory without turning off the conching machine. It churned all night and all through the weekend. On Monday morning, Lindt returned and much to his surpise, discovered that the chocolate was delicately smooth and tasted like it never had before. Chocolate was changed forever. That was the beginning of the incomparably creamy, world-renowned Lindt Chocolate.

The secret to this creamy chocolate was all in the mixing. By evenly combining cocoa butter, cocoa mass and milk powder for a prolonged period of time, Lindt’s conching technique created a ‘melting chocolate’ so fine and so flavourful it was impossible to resist. This was the start of a chocolate revolution. And today, conching is still used by chocolate manufacturers all over the world.

1892: The division between brothers 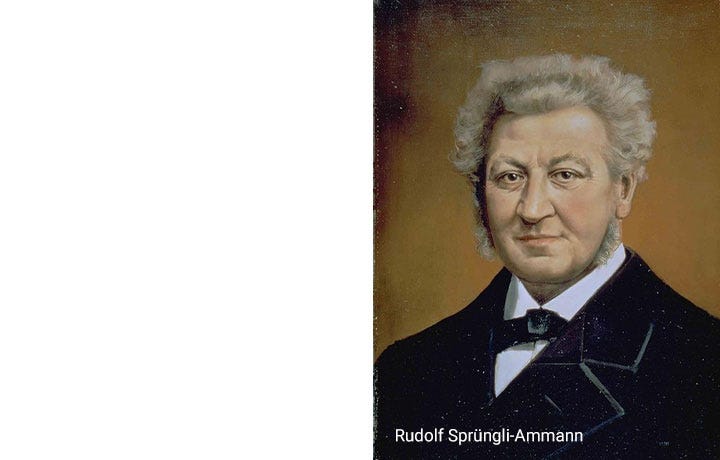 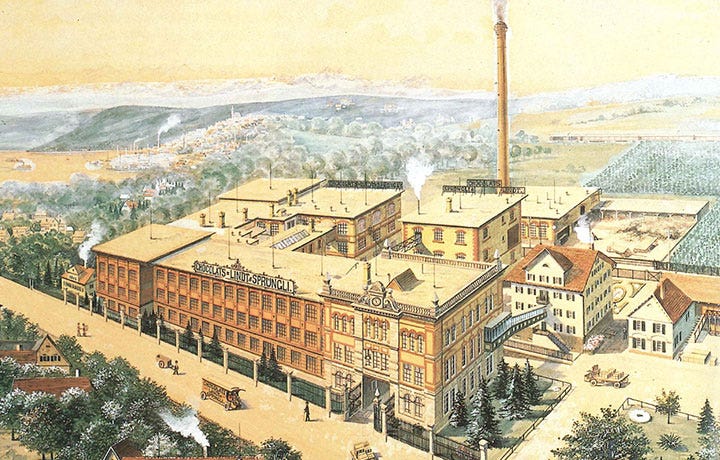 When Lindt happened upon the secret in 1879 that would effectively put Switzerland on the map as a top-tier chocolate manufacturer, Johann Rudolf Sprüngli took notice. His interest had been piqued; he recognised a fellow chocolate connoisseur.

But it wasn’t until 1899 that the two families met. Johann Rudolf Sprüngli had just completed construction on a larger factory in Kilchberg-Bendlikon, the location of today’s headquarters, to increase output. Meanwhile, in Berne, the high demand for Rodolphe Lindt’s creamy chocolate was beginning to strain Lindt’s small antiquated production facilities.

So when Sprüngli offered to buy the company for an impressive 1.5 million gold francs – including staff and the secret recipe – Lindt agreed under the condition that he still had a say in the business. A perfect partnership was born. From here on out, two entities began to exist side by side: Sprüngli and Lindt & Sprüngli – or, as they were officially known at the time, “Aktiengesellschaft Vereinigte Berner & Zürcher Chocoladenfabriken Lindt & Sprüngli”.

The new century started strong for Lindt & Sprüngli, though it was not without its challenges. Despite the First World War, the Swiss chocolate industry flourished, with Lindt & Sprüngli playing a significant role in its success. By 1915, the majority of our output was exported abroad. During the Second World War, Lindt & Sprüngli weathered the storm yet again without sacrificing standards. Due to this dedication to quality, at the end of the war – coincidentally our 100-year anniversary – sales rose rapidly again.

In the 1920s, Lindt & Sprüngli foraged abroad for the first time by establishing general agencies in Germany and the US. In 1928, we founded our first own subsidiary in Berlin with a factory for licensed production. 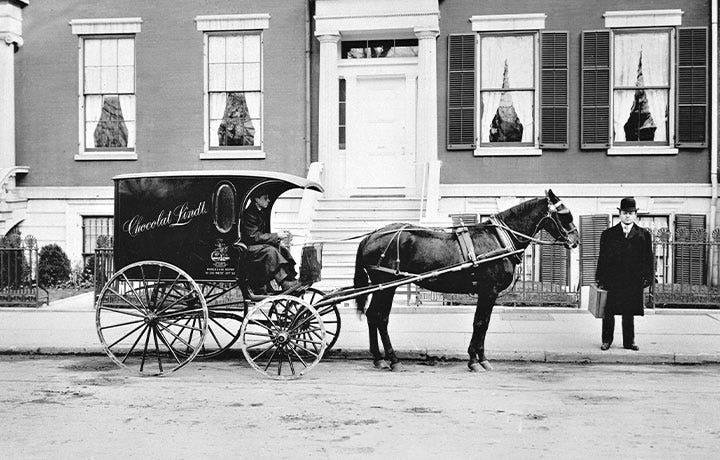 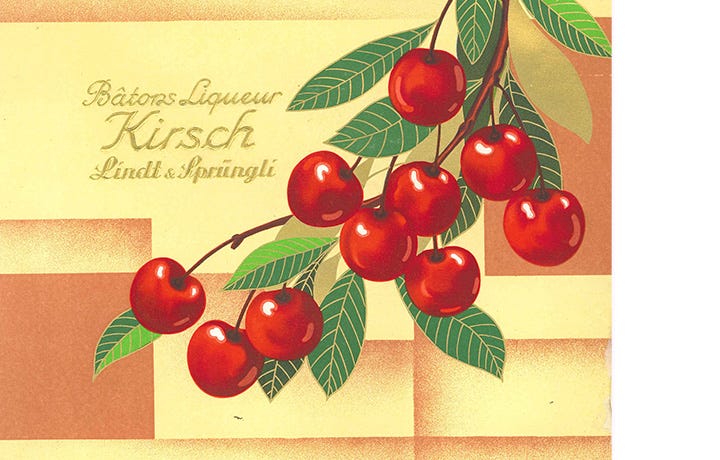 Despite the economic crisis bringing exports to a standstill in the 1930s, our network continued to grow. The launch of the “Bâtons Kirsch” in 1931 proved to be a huge success for Lindt & Sprüngli, and in 1932, a further subsidiary is founded in England. During this period, we also changed our company name from ‘Aktiengesellschaft Vereinigte Berner & Zürcher Chocoladenfabriken Lindt & Sprüngli” to “Chocoladefabriken Lindt & Sprüngli AG”. 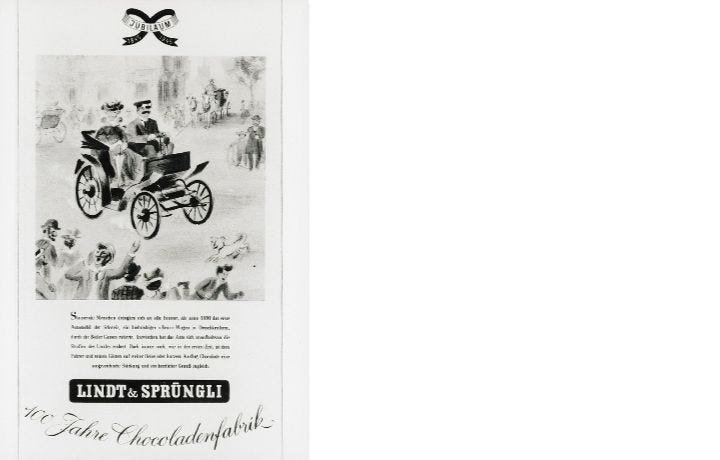 Lindt & Sprüngli turned 100 and celebrated the big anniversary with a 12-part advertising series. The anniversary coincided with the end of the war and chocolate consumption picked up again.

As the war came to and end, Lindt & Sprüngli turned 100 and celebrated the big anniversary with a 12-part advertising campaign. 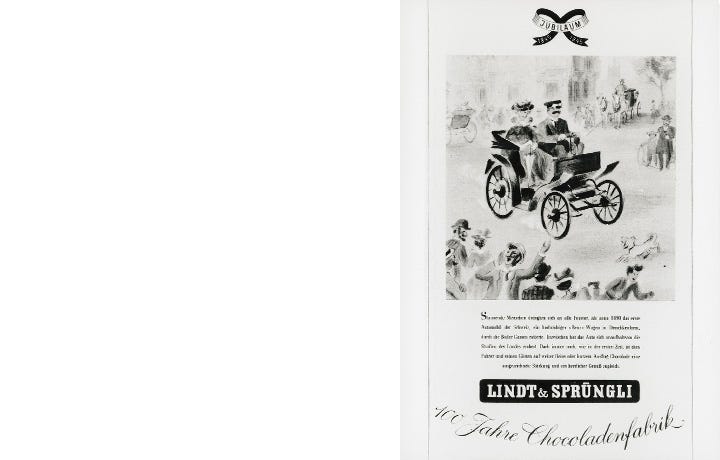 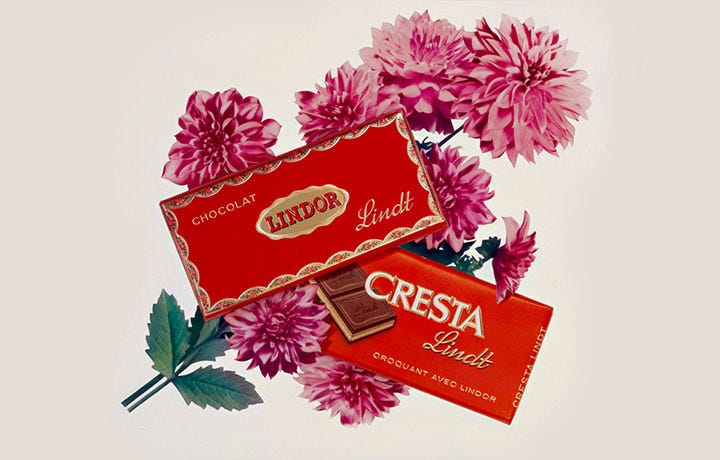 In the wake of the war, our Lindt Maître Chocolatiers wanted to create something heavenly to lift our customers’ spirits. They set to work experimenting with the recipe and tinkering with the conching technique until, in 1949, they came across a chocolate so luxuriously smooth it could be compared to melted gold. We named it LINDOR. First appearing as a bar of creamy, smooth and flavourful chocolate, LINDOR was only associated with the signature foil-wrapped truffles 20 years later. Curious to know more about the LINDOR history?

In 1952, the Lindt GOLD BUNNY first appeared on shelves. Inspired by his daughter, a Lindt Maître Chocolatier created a bunny out of chocolate, wrapped it in gold foil to make it shine and tied a red ribbon around its neck with a little bell so it would never get lost. Today, the iconic Lindt GOLD BUNNY is an Easter staple, signalling that spring is just around the corner. Want to know the entire tale of the Lindt GOLD BUNNY? 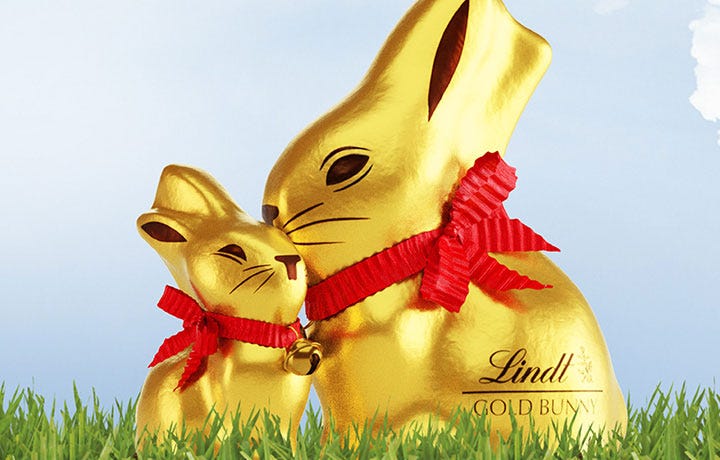 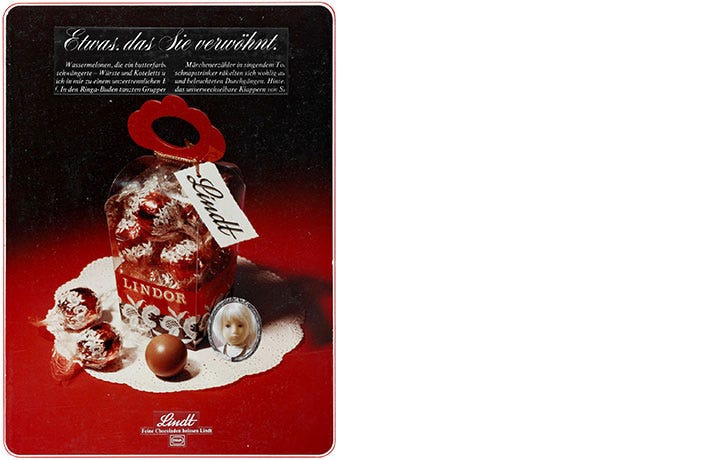 Finally, in 1969, Lindt & Sprüngli released the first red foil wrapped LINDOR milk chocolate truffles as part of a Christmas promotion. They became an immediate success and customers were sad to see them go once the festive season was over...

1972: At the forefront of chocolate innovation

Before the end of the decade, in 1979, Lindt’s Connaisseur Pralines were expanded into their own line, forming a premium collection of chocolates for very special occasions. 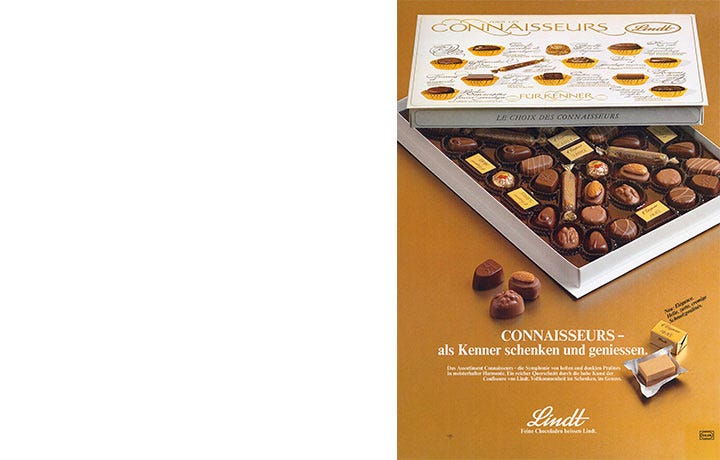 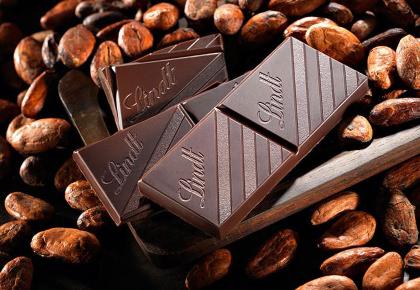 In 1989, yet another classic was created. Lindt & Sprüngli introduced the extra thin Excellence dark chocolate bars with its intense and elegant flavors and fine texture.

The Future of Lindt & Sprüngli

Lindt & Sprüngli is committed to creating fresh new flavours that inspire our consumers while maintaining the highest quality in each of these products. The turn of the century saw a wealth of new delicious chocolate creations and exciting initiatives that bring the world of Lindt closer to you. 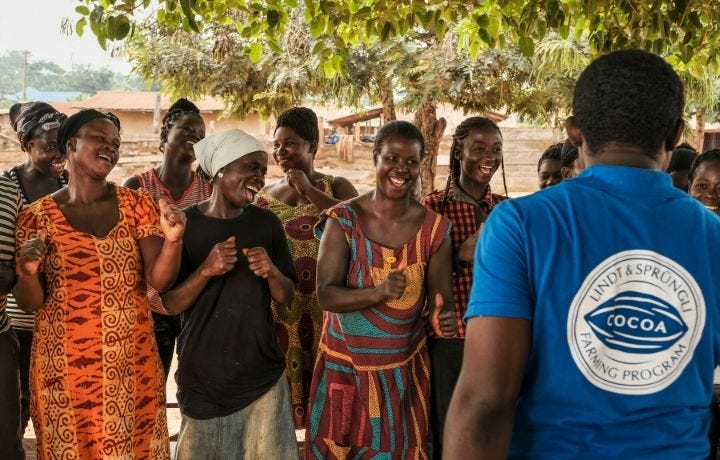 Sustainability is an integral part of Lindt & Sprüngli’s corporate philosophy and is firmly anchored in its strategy, from the sourcing of the cocoa beans to the chocolate product. Since 2008, the Lindt & Sprüngli Farming Program is an expression of this commitment to sustainability. 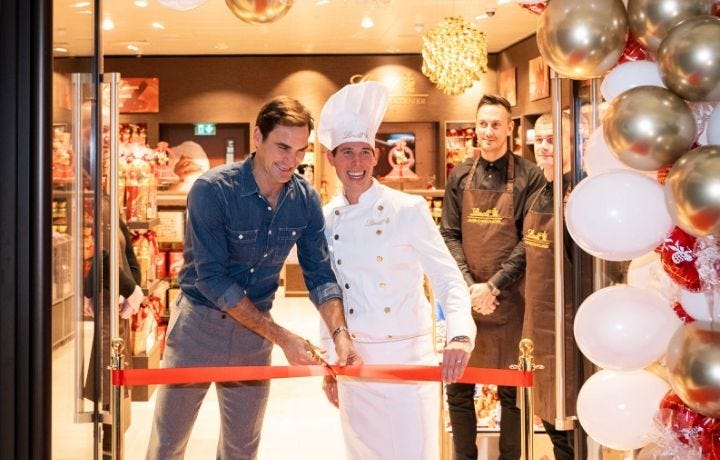 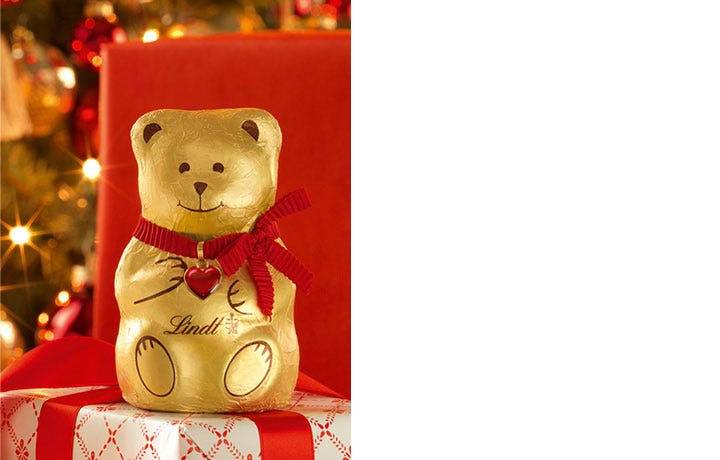 The Lindt GOLD TEDDY is launched for some extra magic during the festive season. 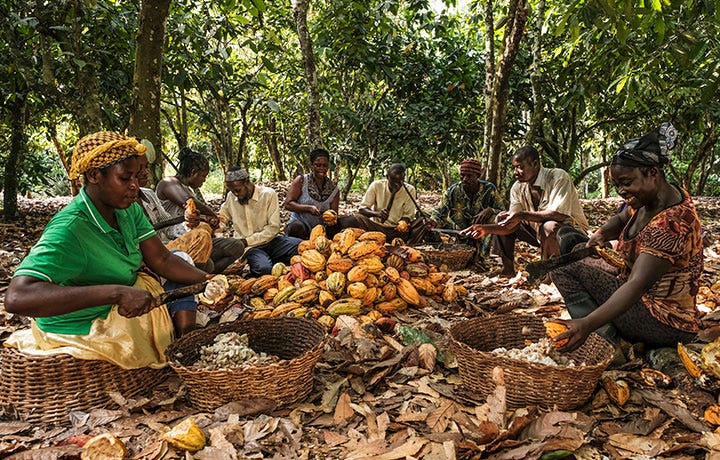 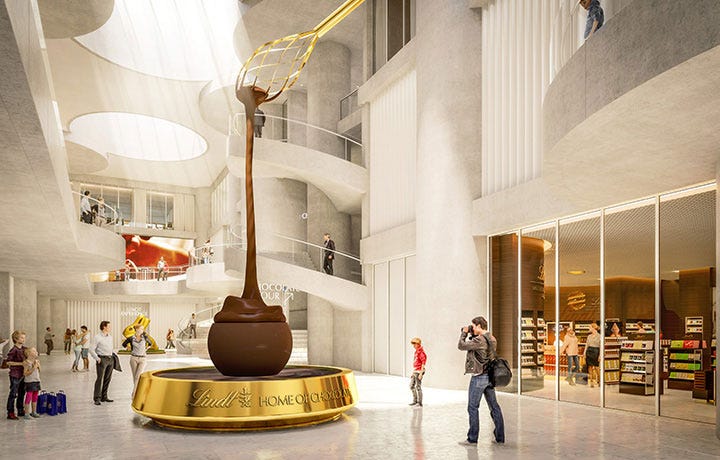 To celebrate our 175th anniversary, Lindt & Sprüngli opened its doors to the Home of Chocolate, a museum and chocolate factory in one. Located at our headquarters in Kilchberg, Switzerland,  it houses interactive exhibits, a research and display production facility, the world’s largest chocolate shop, a café and chocolateria designed for baking courses. As the Home of Chocolate, it’s no surprise that it also has one of the world’s largest chocolate fountains!

Today Lindt & Sprüngli is a household name signalling quality, bliss and sweet delight the world over. A global leader in premium chocolate, we are established in more than 120 countries with manufacturing plants in the US and various locations in Europe. Despite our growth, Lindt & Sprüngli remains a homegrown company – in fact, the Swiss remain our biggest champions with each citizen consuming on average one LINDOR truffle a day.

Lindt & Sprüngli opened its doors to the Home of Chocolate, a museum and chocolate factory in one, to celebrate our 175th anniversary. Located at the headquarters in Kilchberg, it houses interactive exhibits, a research and display production facility, the world’s largest chocolate shop, a café and chocolateria designed specially for baking courses. As the Home of Chocolate, it’s no surprise that it also has one of the world’s largest chocolate fountains! Today Lindt & Sprüngli is a household name signalling bliss, quality and sweet delight the world over. A global leader in premium chocolate, we are established in more than 120 countries with manufacturing plants in the US and various locations in Europe. Despite our growth, Lindt & Sprüngli are still a homegrown company – in fact, the Swiss remain our biggest champions with each citizen consuming on average one Lindor truffle a day. 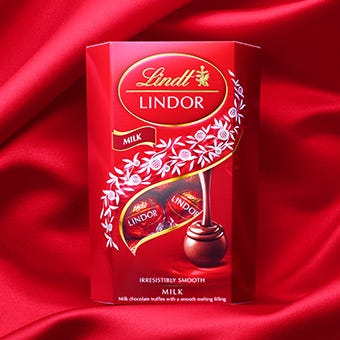 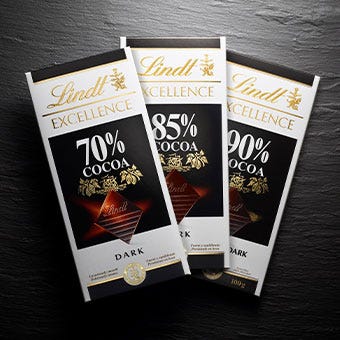 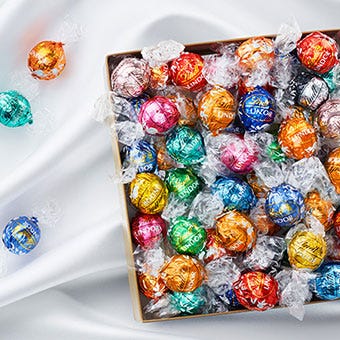 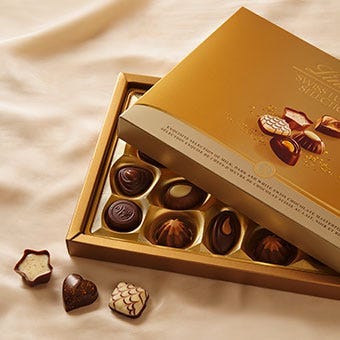